A gigantic wealth of information and pure enjoyment!
The Gouda Pottery Book by Ron Tasman and edited by Friggo Visser of the Goedewaagen Ceramics Museum is presented in three hardback volumes. 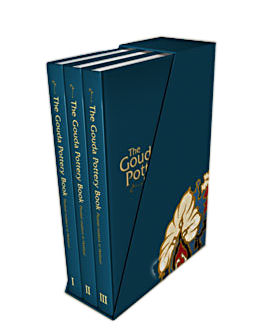 The Gouda Pottery Book (GPB) is beautifully written, formatted and structured, presented in three Volumes and contained in a sturdy slip-case. In short, the 1264 page publication contains:

The GPB is the type of book we have all been waiting for. A 'must' for the serious enthusiast. It has been written for the benefit of all English speaking collectors and admirers of Dutch plateel scattered across the world and it clearly exceeds the expectations of many.
The Gouda Pottery Book has been passionately embraced by international plateel collectors for whom access to many discoveries and developments, brought to light via a series of Dutch books, journals and exhibition catalogues, has been impossible.

The three-volume publication gives an in depth and comprehensive insight in the extraordinary plateel industry in The Netherlands. Ron Tasman has dug deep in order to present many new facts which supplement many previous (Dutch) publications.

By separating the entire project into three sections a clear picture emerges of the different periods within the Dutch plateel industry.

Volume I
Tasman rightfully places much emphasis on the two crucial decades before the foundation of the first and largest Gouda art pottery, The Plateelbakkerij Zuid-Holland. Although several (Dutch) books have been published during the last 30 years or so with detailed accounts of factories in and around Gouda, including some of the early potteries, Ron Tasman makes the crucial connection between the Gouda era and the precursor potteries in Volume I.

In chronological order the author first looks at the pioneering renewal earthenware factories, De Porceleyne Fles and the Haagsche Plateelfabriek Rozenburg. Together with their followers, which include the Faience en Tegelfabriek Holland, Plateelfabriek Firma Wed. N.S.A. Brantjes & Co., Plateel en Tegelbakkerij De Distel and Kunstaardewerkfabriek Amstelhoek they, collectively formed the platform for the later developments in Gouda. All of these, and others, feature prominently in the first volume.

The second half of this volume is dedicated to the biggest plateel factory: The Plateelbakkerij Zuid-Holland, (or PZH for short).

Eight chapters take us on an interesting journey through the factory's inception, growth and decline. Oozing with enthusiasm the author presents the various facets of this incredible industrial success story and highlights its diverse portfolio ranging from intricate floral to simple geometrically designed hand-painted décors. From unica (one-offs) to mass-produced objects, such as plates, vases, jugs, tiles, figurines and service ware. Most of these were available in gloss, matte or experimental art glazes. With its commercially driven innovative marketing strategy, the PZH was always in the lead, continually setting new examples, all beautifully described by the author.

Volume II
In writing Volume II, Ron Tasman delves deep into the next wave of entrepreneurs; the followers of the PZH. Detailed accounts of numerous factories are given, all mushrooming soon after the first decorative wares left the PZH kilns.

The final eight chapters of Volume II are dedicated to the pre-existing Gouda pipe factories, 'Ivora', 'Regina', 'Zenith' and 'Goedewaagen' and how they came to be involved in the decorative arts.

Detailed accounts are also given of the many generations of the two pioneering pipe making families; the Van der Want's and the Goedewaagen's. With these accounts Tasman presents much new material, most of which has come directly from the respective family archives.

Volume III
The final and largest Volume (III) not only features numerous additional potteries, but also displays about 2200 company marks, signatures of decorators and pipe marks and a total of 155 artist biographies. The icing on the cake is a magnificent 90 page register of staff employed in the industry with dates and places of employment.

Most of the potteries discussed in this volume were founded after the First World War triggered not only by the previous Gouda successes but also by the response to the sudden demand for new and differently styled products. This volume also highlights many of this third wave of potteries which followed the Art Deco matte glazed pottery of the 1920s and the experimental flow and lustre glazes of the 1930s. Gouda's war time production and the subsequent post war designs are also brought to light.
Two interesting separate chapters are also dedicated to 'Gouda style' ceramics made abroad.

While the price may seem a little expensive at first glance, it still only represents about half the price of a good Gouda vase.

The Gouda Pottery Book can be purchased from a number of On-Line Booksellers in various countries, such as those listed in the table below.

Feedback on the GPB

If you have already bought the Gouda Pottery Book and treasure it, please contact us with your comments and views via our email address: